In 2007, we started BLOG Zentangle and began our enjoyable series of conversations within our Zentangle community.

In reading through these blog posts with their insightful comments, we decided to bring a few of them to your attention from time to time. It is easy, for me anyway, to sometimes think of old information as stale information. But these insights and conversations are anything BUT stale!

​I have spoken before that I have been an artist since about the age of 5.

But what made me have to be an artist? Why was I so focused at such an early age?

Well, I actually know what it was, or should I say who it was.

When I was really little, (I am #6 of 7 children) I would hang around my with Mom while she was tidying up her bedroom in the mornings, talking to her as she so carefully made her and my Dad's bed.​ As usual I sat or rolled around on the floor, gazing at ceilings or marveling at the different perspectives of things, and one morning, I spotted something under her bed. I carefully slid it out, and asked my mom what it was. 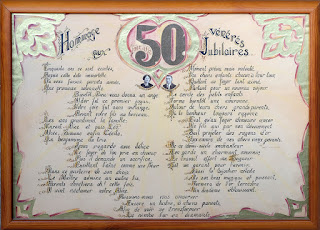 There before me was a framed "something or other" that, at the time, I had no word for. My mom joined me, kneeling beside me and wiped the dust away ever so carefully, and explained to me what it was. "Ma tante Alice" ( "my aunt" in French) made this for "Memere and Pepere" (her mother and father's) 50th Wedding Anniversary in 1952. She explained that it was a story that her sister had written (in both senses of the word) to give to her parents as a gift.

I could not read at the time nor did I know much French. But it was not what it said, but how it looked, that fascinated me. Letters going in all directions, beautiful swirls and decorations around the letters, gold and red accents, cut paper borders and fancy corners . . . I was in LOVE!

After that, I would visit this masterpiece often, studying the tiniest details, following the margins, counting the stanzas, admiring the concept of writing beautifully. At that time, I only learned how to write properly . . . not beautifully. This was another world, and I wanted to go there.

From then on, most of my art included letters of some sort. My idea of fancy and beautiful morphed over time, but my passion never ceased. I studied mostly on my own, having taken a few classes with Michael Sull, a penman from Kansas.

My Aunt Alice, was actually called "Sister Maria Fidelis," a Presentation of Mary nun. None of us knew her as anything but a nun. She was always "Aunt Alice the nun" because we had another aunt named Alice who was not a nun (but, this is too funny, as I had not really thought about it in a long time, but this other Aunt Alice actually once had been a nun, then came out of the order, and at the age of 40, married my uncle and proceeded to have four children! Really! You couldn't make this up . . . but I digress . . . )

Not only did "ma tante Alice the nun" give me my name (another story!), she was my "MUSE." 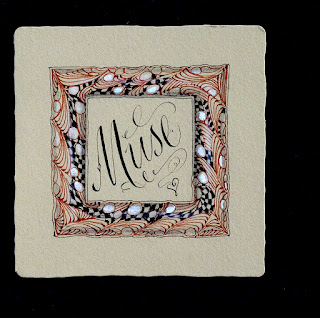 A "muse," according to the dictionaries on this computer, was originally a female who inspired creativity. I am guessing maybe, way back then, women could inspire, but not create(?). Muse eventually became more generally "the source of an artist's inspiration," "creative influence" or "stimulus."

Eventually, after my parents passed, and the "family treasures" were distributed among us, I chose to take this piece home with me. It hangs in my studio as a constant reminder of where I came from.

So, what has this got to do with all of you?

The piece of art that inspired me was not the work of an Old Master. It was not the work of a professional artist, or a world renowned calligrapher. It was a simple, humble, work done with limited materials and expertise, but with unlimited love and passion. In an antique bazaar, someone might purchase it only for the frame, but this piece directed the course of my life.

What role of "muse" might your Zentangle creations play for others whose urge to create is yearning to be sparked, but who may think they are not artists? How might your work change the lives of people you will never meet . . . a chance glance over your shoulder in a restaurant . . . a sighting in a friend of a friend's home . . . a five-year-old's first vision of a tangle . . . ?

You have no idea where or how you will influence the lives of others. You do not have to wait for some predefined level of accomplishment for your creativity to have an impact. You do not have to create like daVinci, or Picasso, or Rembrandt to make a difference. (And even if you could, wouldn't that be more like copying instead of creating? Only you can create like you can create!) And when your creation is out there, there's no way to predict when and where it will strike that chord in someone that will resonate throughout his or her life.

Dear tanglers, who was your "muse"?

Please tell us a little about them.